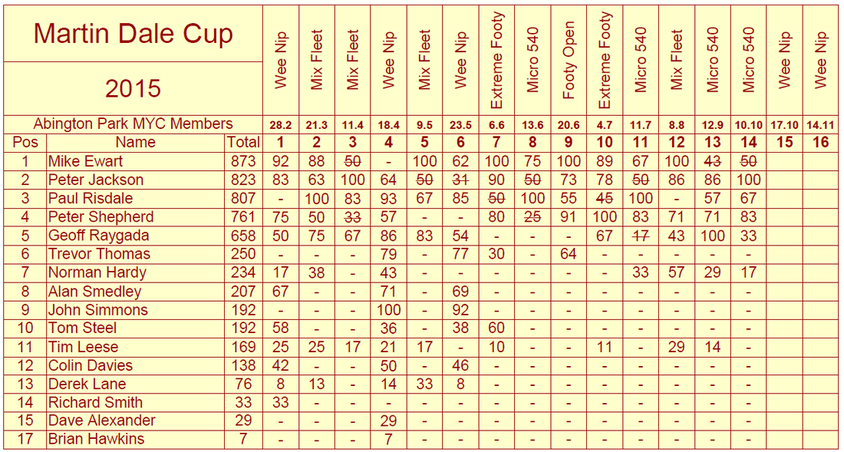 Round One _ Wee Nip
Our season opener took place on the main lake at Abington Park with a round in this years Wee Nip Medal Competition, Mike Ewart took the lead at this early stage however perenial winner Paul Risdale was unable to be present due to a bout of flu, hopefully Paul will be back soon, for the next round which takes place on 21st, March 2015, a Mixed Fleet competition.

A full report of the Wee Nip event can be found on the Wee Nip website.
Round Two _ Mini Mixed Fleet
Indeed Paul did return with avengence taking maximum points from the event victory although the conditions meant that everyone had a turn up the front and the racing was good fun with numerous close finishes.
Round Three _ Mini Mixed Fleet
Just six stallwarts of Abington Park MYC attended Daventry Country Park, the weather looked like it was going to be bad but turn out to be good, the wind direction was just perfect enablling us to set a close to shore up wind down wind course. Lots more RG65's today the RG65 designs beating the one Dragon Force of Mike Ewart although when the wind picked up Mike took his revenge. The one Micro 540 struggled. Once again a good time was had by all.
Round Four _ Wee Nip
A full fleet of skippers braved the off shore winds, loose marks, dogs and women, despite everything nobody lost their cool, I think everyone enjoyed the racing even if it extended some of the skippers knowledge of the racing rules of sailing at times. John Simmons went home with the big prize, Paul Risdale was always in the hunt and should be pleased with his days racing. The battle in mid fleet was fierce, and some of the regular supporters of the class showed a continuing improvement.

Full Report here
Round Five _ Mini Mixed Fleet
Just four stalwarts and a couple of wannabe stallwarts took part in this weeks Mini Mixed Fleet Racing, I wasn't there so can only guess what happened so here is my best guess! Everyone had a great time and the event was most enjoyable, I hope so anyway! - Get the proper report here
Round Six_Wee Nip
A full fleet of thirteen skippers took part in the sixth round of the Martin Dale Cup, the emphasis now moves away from the larger yachts in our fleet with June and early July having two Footy Events and a Micro 540 which is bound to shake things up a bit.
You can read what happened in this event here.
Round Seven_Extreme Footy Series ACT5
The first of three Footy Events that could define this years Martin Dale Cup, a new leader and a closing up at the top, expect things to get much tighter as skippers start to discard their less sucessful events from round ten onwards. To see how it all unfolded for this event click here.
Round Eight_Micro 540
Wet and miserable, no wind, I wish we had taken up Paul Risdale's suggestion of packing up after the first race but of course by then the Gazebo was wet and so we stayed until the wind failed us completely, the strains of a Tina Turner sound alike bounced across from the carnival parade ground and the rain had soaked us through, apart from this a great time was had by all!

Round Nine_Bassett Lowke Trophy
The light winds made this a tricky event to get a handle on with skippers working hard to get away from the pack only to find their lead eaten up by favourable winds to the chasing pack. The conditions meant you were never out of the running even when you went from first to last and then somehow managed to get back to take a second!
For all the details click here.
Round 10_ Extreme Footy Act Six
A most enjoyable days sailing in the last of the Footy events to count towards the 2015 Martin Dale Cup, some more points were scored by everyone involved at the top of the leader board, how it all is going to finish up is hard to tell however the discards will start coming into effect from the next event which hopefully will give us a clearer picture.
The details of this event can be found here
Round Eleven_Micro 540
What a turn around, a good breeze blew accross the pond, six skippers were in attendance most of which were pretty evenly matched, five managing to take at least one race victory from the 17 races. The RO set a long course using almost all of the available space in the lake, even so we seemed to manage to rattle through the races, so much so that he had to extend the course after lunch the change causing a bit of confusion but hopefully not too much!

Round 12- Mini Mixed Fleet
On the Main lake in Abinton Park an assorted mix of different boats had a most pleasent days sailing with two skippers going head to head throughout the day to produce one of the seasons closest results yet.
Round 13 - Micro 540
the usual suspects attended this round of the Martin Dale Cup - held over from September to allow the majority of the fleets skippers to participate in the Six Metre Nationals the day was split into two Meetings the am meet being the September one and the pm meet the October. 12 races were completed for each event giving each competitio 2 discards. In the morning Geoff Raygada sailed his Abracadabra away from the rest of the closely comepetive fleet to take victory. Indeed three skippers finished on 27 points and had to be seperated by count backs! Much qudos goes to Tim leese who only turn up to support the event and found himself racing Paul Risdales soft sailed swing rig Puma 54!

Round 14 - Micro 540
Tim departed to cut his grass and the rest of us sailed on, despite servo difficulties it looked for all the world as if Abracadabra's were going to take both events when by race 8 Peter Shepherd had built up a healthy lead. The RO asked if everyone wanted to go to race 12 at this point to and such was the closenes of the racing that almost everyone agreed to continue, it was at this point that PJ mounted his challenge continually pipping Peter S by the odd place and then with the final race of the day overhaulling his points total.
With Geoff appearing to have boat difficulties, which turned out to be battery and borrowing back his Wee Nip hull from Mike, Paul then lent Mike his Puma 54 which was much more to his liking.

The dates for the qualifying events are as follows