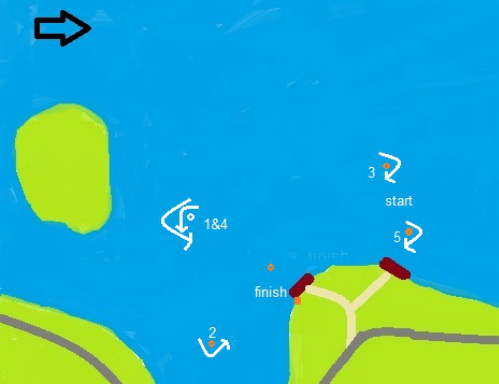 With Daventry Country Park still having problems with weeds Two Islands very kindly stepped in to allow us to run the August round of the Martin Dale Cup at Furzton Lake, it was an unusual experience for Peter Jackson and I to be setting a course on this water, in line with our recent thinking we went for some close to shore windward/leeward legs. Thanks PJ I promise I will do the boat thing next time!

The westerly wind was splitting around the Easterly Island which made predicting the tack to be on from the start a bit tricky, generally most skippers opted to start on starboard, with Geoff Raygada using the wind off the bank on more one occasion to his advantage, Peter Shepherd & Paul Hunter  both experimented with port tacks out into the wind from the far side of the island which sometimes had the advantage although it was somewhat tricky to pick the right place to come back to shore.

The rounding of the upwind marker buoy located just far enough into the lee of the island to make this devilish at the best of times and the course setters in what can only be described as a fit of madness included it twice! Once around the upwind it was off into the eastern bay fortunately the wind picked up almost as soon as you had left the mark and at first it seemed as though you wouldn't be able to make second buoy without a tack however here the closeness of the banks did you a favour and you were able to tighten your line to make the mark relatively easily.

The third leg was downwind going from a broad reach out of the bay to a true downwind leg once out into the more open water, once again we were tested with the options of returning inland early or staying out and coming in nearer the island returning once more to the first devilish mark, rounding this to port we had a true downwind leg to another starboard rounding of the final mark close in to the bank. The final leg ran along the shore to a finish between the eastern launch deck and a mark just off, it proved tricky on more than one occasion with a number of skippers giving away places and quite a few finishes where you could throw a footy jib over three or four boats on the line. 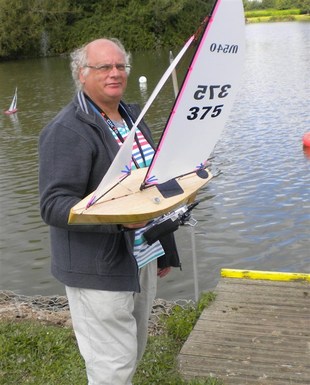 The morning belonged to the Micro 540's the lighter winds suiting Paul Risdale's (515) narrow beamed Goth 54 the best, Peter Shepherd's Abracadabra (165) was in the hunt early on however it took him a few races to recover from an uexpected battery failure in race five, this race also saw Nigel Rudd (96) bring his Rg65 Black Ghost home for a first place and his best result of the day. The rest of the fleet had mixed results as they adapted to tricky course conditions. As the wind strengthened in the afternoon session so Paul Hunter's (03) Dragon Force started to come into it's own and the wider beamed Abracadabra's of Peter Shepherd and Geoff Raygarda started to establish themselves at the front, Paul Risdale switched down to his experimental stronger wind rig which went someway to explaining the tailing off of his results from race 10 onwards.

In the end it was all very close with the top two skippers ending the event on 50 points each, Peter Shepherd (165) just finishing ahead of Paul Hunter (03) by two points, down to having some bigger discards. Paul Risdale (515) finished third, just ahead of Geoff Raygada (375) who continues to improve with each event sailed. Peter Jackson (305) & Trevor Thomas (58) were both consistent with Peter Jackson pinching a few second places in the tricky last leg. Peter Wood (14) had an excellent day on the water completing 14 trouble free races with his Dragonforce before his taxi duties meant he had to leave just before the end. Returning to racing after some time away Nigel Rudd (96) sailed his RG65 to a couple of good results including the aforementioned win and Tim Lees (93) deserves a mention for his persistence.

The short legs and trickier nature of the course setting meant that the racing was close throughout, with all the skippers in with a chance in every race, at the end it was anybody's guess as to who had won the event.

The next Martin Dale Cup event will be held on the 20th September 2014, hopefully we will be able to return to Daventry Country Park however check your email before setting out as the venue may have to change.
The points for the Martin Dale Cup are worked out in the following manner, 40 points for a win, 39 for second, 38 for 3rd and so on, plus for RG65 Class yachts a bonus point for every RG65 you finish ahead of, for Micro 540 class yachts there is a bonus point for every yacht you finish ahead of regardless of class.