The course was set as a simple windward, leeward mark both being rounded to port. the wind co-operated by keeping the start to varying degree's of a port tack the smart money leaving as close to the far mark as possible.

Almost everyone assembled promptly, with just the odd straggler, race results were divided up reasonably generously and the close positioning of the field in the overall table reflects how little there is to choose between many of the skippers here. That having been said one skipper always seems to break clear of the fleet and record the win sometimes more emphatically than today but even so this years performance by Paul Risdale 53 (Gothic) has been most exceptional.
Mark Beesley  05 had his best result yet sailing his Bermuda Rigged Puma into a well deserved second place, the rest of the positions could have gone anywhere as no one seemed to know where they had finished or indeed weather they had finished at all!
As in turns out once the results had been fed into a computer, analysed and interrogated Peter Shepherd 65 (Jif 65) just pipped Peter Jackson 30 (Puma), how many times have I written that this season, into third place . This was the first time in the water for PJ's new boat so I predict better things to come.
Mike Ewart 36 (Viperfish) and Graham Stanley 88 (Razor) had quite a battle for sixth and as usual Nigel Rudd 96 (Ghost) had more than a couple of races at the sharp end this time managing to hang on to some of his higher positions. Newcomer to the sport Richard Smith 153 (Puma) had a series of creditable results it all about practice for him at this stage.
Peter Wood 14 brought along our competitions first adapted Dragon Force, we gave him a hand before the start to sort some of his rigging issues out, and although he had shortened the keel by a couple of inches it was still slightly to long, so little can be drawn from it's finishing position here. It would seem that 75mm is about what you need to remove to make it fit the Abington Park Lake. Peter Wood assured us that it was going better after the mods we made including the keel reduction however having not seen it sail before it was very hard for us to draw any firm conclusions. Personally I would think long and hard about altering the keel length unless water depth is an issue as it is in our lake.

The results below vary slightly from those announced at the lakeside, so apologies to Judith for the minute box she had to write the scores in and to any skipper that thought they had done better than they really did, and also to those who went home slightly disappointed from their announced result only to discover actually they didn't do so bad after all.

Thanks to all who attended and with just two events in this competition left we look forward to seeing you next time, that event being scheduled for 6th October. Can anyone take a win from Paul Risdale and prevent him making it a whitewash? 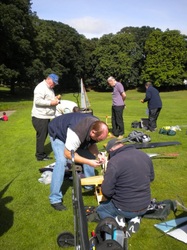 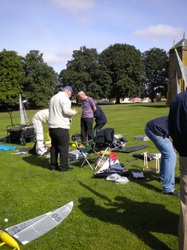 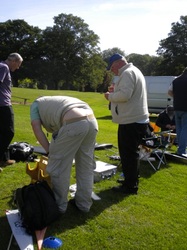 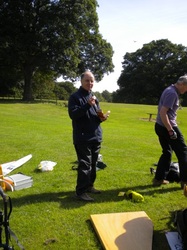